I Think, Therefore We Have Nothing In Common

I LOVE this shirt. Sadly, it resonates with my Adventist experience. 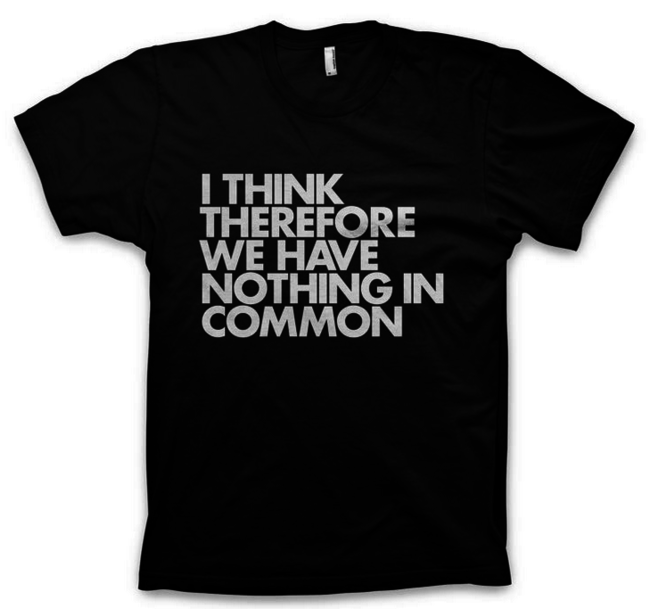 I’m not an Adventist careerist, so I have a mind of my own. The careerists hate that. So do the institutionalists.

Both the careerists and the institutionalists utterly disdain people who question mediocrity.

It’s like Ed Crooks, a writer for the financial times, says: “When you’ve had a monopoly for a hundred years, and you’ve never seen change, change may seem like death to you.”

For over 100 years, the church has felt a monopolistic right to be a gatekeeper and the sole distributor of certain information. In many respects, I believe the institution feels that is has no competition and is therefore not compelled to pursue change; and when you’re thinking like that you basically have no reason to innovate.

What the thinkers among the Adventist church know (yes, there are more than Adventist leaders would lead you to believe) is that you can’t grow—cannot—unless you are willing to change. Growth is change. Change is growth. Lack of change is decline. Lack of growth is decline.

Yes, God never changes, but He is perfect. He doesn’t need to grow. He invented growth.

Want to get your friends involved in the discussion? Here are a few intriguing title suggestions you can use to get their attention on social media.

I was speaking with a friend recently about the state of the Adventist church and they said something that was hilarious (and sad) all at the same time. I almost died laughing. They said Dan Jackson and various other NAD and Union... Continue →